Home Wellness Sex & Vaginal Care How I learned about sex, a vagina, and a penis
3 minute read

How I learned about sex, a vagina, and a penis

When I was a high school freshman in 1977, the P.E. teacher invited me to take what she called a health class. Since I was always interested in the subject, I agreed to give it a try. It turned out to be a class for girls only. When I walked into the room, someone snickered and said, “So, you want to learn about sex, huh?” I guess it never occurred to this girl that a blind person like me might be curious about the subject, just like anyone else.

For the first couple of days, the instructor covered basic health issues. On the third day, she gave us THE DEFINITION. I remember her words as she spoke and wrote them on the blackboard. “Sexual intercourse is the insertion of the penis into the vagina.”

Knowing the meaning of the words “penis” and “vagina,” I was shocked to hear them spoken out loud, by a teacher, of all people. I never returned to that class. Later, Dad told me and my younger brother Andy that sexual intercourse was something done by a man and a woman who loved each other and that this was how we were created.

When I was a senior, studying Spanish, it occurred to me that song lyrics didn’t provide graphic descriptions of love-making. I decided to write a song with the dreadful words I’d learned during my freshman year but put them in Spanish and have the rest of the song in English. But I couldn’t find the words “penis” or “vagina” in my braille English/Spanish dictionary. What was I to do now?

Since I didn’t feel comfortable asking my male Spanish teacher for help, I came up with an alternate plan. Instead of writing in Spanish, “Put your penis in my vagina, my darling,” I would write in Spanish, “I don’t want to be a virgin.”

My dictionary had the word “virgin.” So, I wrote my first line. But that was as far as it went. It didn’t sound as romantic as “Put your penis in my vagina, my darling.” If I couldn’t write that in English or Spanish, I wouldn’t write a love song at all.

Although my parents would have helped me find those words in Spanish, I didn’t tell them or anyone about my project. It was too embarrassing. I realize now that wouldn’t have been nearly as humiliating as if I’d let someone put his penis in my vagina, and as a result, I’d gotten pregnant.

A while back, I discovered the Spanish translation of the words “penis” and “vagina.” But over the decades, I matured from a curious, silly teenager to a sensible woman. I had no sexual experience at all, even after I was married in 2005.

My late husband was impotent. Because we decided not to engage in intercourse until after the wedding, we didn’t find that out until then. But it didn’t matter to either of us. We were happy just being together, snuggling, kissing, and touching each other. For some reason, it never occurred to us to try reaching a sexual climax in other ways.

I’ve since come to the conclusion that sexual intercourse, as defined above, is unnecessary unless a couple wants children or is past their child-bearing years. I have friends who can give each other pleasure without the insertion of the penis into the vagina. So, I doubt I’ll ever write that Spanish love song.

Abbie Johnson Taylor is the author of two novels, two poetry collections, and a memoir and is currently working on another novel. Her work has appeared in The Writer’s Grapevine, The Weekly Avocet, and Magnets and Ladders. She lives in Sheridan, Wyoming. Please visit her website. 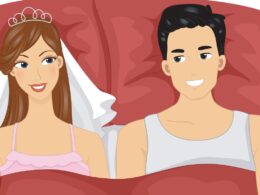 Should your husband ask for sex?

This website uses cookies to improve your experience while you navigate through the website. Out of these cookies, the cookies that are categorized as necessary are stored on your browser as they are essential for the working of basic functionalities of the website. We also use third-party cookies that help us analyze and understand how you use this website. These cookies will be stored in your browser only with your consent. You also have the option to opt-out of these cookies. But opting out of some of these cookies may have an effect on your browsing experience.
Necessary Always Enabled
Necessary cookies are absolutely essential for the website to function properly. This category only includes cookies that ensures basic functionalities and security features of the website. These cookies do not store any personal information.
Non-necessary
Any cookies that may not be particularly necessary for the website to function and is used specifically to collect user personal data via analytics, ads, other embedded contents are termed as non-necessary cookies. It is mandatory to procure user consent prior to running these cookies on your website.
SAVE & ACCEPT
Total
13
Share
5
8
0
0