“I’m not too sure where to post this but the MRKH subreddit is very dead, so I guess I’ll give this a shot??. I have MRKH syndrome. Basically meaning I was born with without a vagina, vaginal canal, cervix, uterus, and fallopian tubes. This makes me unable to have sex, and unable to have children”

“I met a guy on a dating app about a week ago and we’ve been texting since. I’ve been super busy with school, volunteer work, and meetings, so we haven’t actually met in person yet. We spoke on the phone once so far while he was walking home from work at 3 am (he’s a bartender). He’s really funny, and I feel like he gets me. We’ve set up a coffee date for Wednesday and I’m really looking forward to it.”

“So far, he’s definitely shown interest in me, saying things like how he’s been crushing on me or how he thinks I’m really sweet and lovely. I don’t want to get ahead of myself but I feel the same way back. This is the first time I’ve ever connected with someone this way on a dating app!”

“I’m excited but at the same time, I’m also VERY nervous. He’s very honest and blunt about things and I feel that I need to reciprocate that. A lot of doctors and therapists say that there’s no ‘right time’ to discuss it, only when you feel comfortable. Although that’s true, I don’t want either of us to be invested in the other before having the chance to talk about it. So I guess my question is how long should I wait before telling him? Would it be too much if I told him on our first date? I mean, for all I know maybe he won’t even be interested in me after meeting in person. But at the same time, if he is, I’m not trying to scare him away”

“And a follow-up question, how do I begin to tell him?? Maybe a funny way to approach it? Or a good conversation starter that could lead the conversation towards my condition? I’ve only told one guy before and that didn’t go too well. I waited a month to tell him and I ended up crying while doing it. He was interested in me before I told him but afterward, he was only interested in being FWB. My self-esteem definitely took a kick with that one.

Any advice would be good really. Thanks”

From the above Reddit, a number of comments come up where people were giving advice to the lady on what she should do

1. Dating is getting to know if you match with someone

“Definitely true there is no right time! But the important thing you have to remember about dating is that it’s all just trying to figure out how good of a match someone might be for you. A lot of people treat dating as if it’s the immediate jumping off point into a relationship. It’s not. It’s romantic fact gathering and sexual compatibility is 100% a part of that. So, guys who are good matches for you will inevitably be cool with your situation. So, whenever you tell a guy, this becomes like a litmus test. If he acts like a dick, you know he’s not the right guy for you (given the chance for him to be a little surprised though)! So revealing on the first date is fine, or revealing on the date where you think things might go below the belt (which could also absolutely be the first date) is also fine. That said, you absolutely can have sex. You can have oral, you can have anal, manual…etc etc. Those are “types” of sex. And many guys like those more than vaginal (usually not manual, but whatever). There are also plenty of men who absolutely don’t want to have children. Finding that out will also be good. Either way, the best way to reveal it is probably either in a funny or flirty way. I don’t know if you are comfortable saying something like “sure I don’t have a vagina but I make up for it by giving amazing head”

“But yeah, it’s going to be a turn-off for some people and rejection always sucks. But that’s true of any aspect of a person. Like a particular kink, or political ideology, food preferences…etc. etc. For example, I’m someone who is polyamorous and that automatically eliminates like 80% of the dating population. I personally mention it on my dating app profiles, but people seem to never read those, so I get aggressive rejections after chatting with people all the time. That’s just a part of dating”

“I also wanna caution you a bit (and this is in some ways a reiteration). A big part of dating is developing crushes on people you don’t know well. It’s great you guys have a formative connection. But you don’t know him at all. People, when they date, create pictures of possible futures with imaginary versions of people. While it’s great to have those fantasies, it’s absolutely vital to remember they are just fantasies and do not hold them too close to your heart because it’s very very rare to end up married forever to the first person you meet from a dating app”

“Just be honest. And look, if this guy isn’t down because of that, then he wasn’t getting to know you for the right reasons, and either way, he’s not the one to be spending your time on”

“If he is into you I don’t think it will scare him away if you outright tell him. I don’t think it’s a bad idea to tell him upfront because if he is looking for long-term commitment that may conflict with his ideals i.e. wants biological kids, high libido, etc. if it scares him away or he isn’t into it or even just wants to sex you’ll know to go ahead and move on to look for the right one”

5. She has MRKH syndrome too

“Crazy I stumbled on this today. I have the same condition. Have you joined the Facebook groups? The girls there are very supportive.NO, it’s not ‘smooth’ or ‘like a Barbie doll’. The outside is fully developed, MRKH affects the canal so while there’s an opening it’s very short. You can gain more depth with dilators, which are basically dildos you insert daily for about 20mins and size up. You can also dilate naturally with a partner depending on his size it can be more painful. Surgery is an option too, but I’ve never had it because as other posters commented, there are many ways to be intimate”

“In my experience, a number of men are turned off by the no biological kids part, but if that’s their deal breaker they’re not the guy for you”

6. His girlfriend has the same condition

“My girlfriend has MRKH and told me on the second date when it looked like there was sexual tension. It didn’t change how I felt about her but I took some time to think about it after that date and we talked about the implications of family, kids, sex the next time we met up. The things that made me not worry about it were 1. I liked her 2. It felt like we were on the same page going forward and were willing to work through any hurdles we might encounter. And If the guy you’re seeing reacts negatively then that’s a good sign that you shouldn’t be together and you can move on sooner because you deserve to find someone who will support you”

“Also, don’t do anything you’re not comfortable with and don’t let anyone guilt or pressure you into any sex acts just because you can’t have vaginal sex. If he’s the right partner for you he’ll be willing to take time to explore and find things you can enjoy together and that you’re okay with”

Many women have such a condition but all they need is our support, if you find one, try to be supportive and understanding.

Is sleeping without underwear good for your vagina? 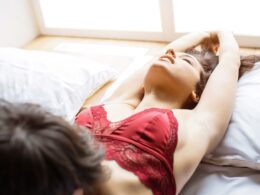 Why do people scream while having sex?

25 tips for maintaining a clean and healthy vagina.

What you never knew about your vagina