Home Uncategorized Mother of three can lift a can of beans with her vagina.
1 minute read

Mother of three can lift a can of beans with her vagina.

Viewers of daily mail were left in wonders on seeing a woman who would lift a can of beans with her vagina.

She has gone ahead to encourage all women to use jade eggs in order to strengthen their vagina muscles.

While speaking to the host Ruth Langford and Eamonn Holmes, Kirsty said was running after birth and she realized that she had wet her self.

She said she went ahead to do some Kegels but they did work for her until she met a woman at Waitrose who told her about jade eggs.

She went ahead and said she is so grateful to shop in Waitrose.

Kristy said that she trained her self about how to use jade eggs and we went ahead to explain saying “vaginas are amazing, they are flexible .vagina are squeezing to hold that in”

She showed off her strength in a video clip where she was swinging 250g of marmite before she switched to a tin of baked beans and finalized with a 2kg bag of beans.

Describing the exercises, she said, ”imagine all this like you are sipping a cocktail through your passage at the back”

Kristy said its all about pulling up, relaxing a little bit and then pulling up.

Kristy went ahead to explain how she has better orgasms.

210 wild other names for vagina that will shock you.

Vaginal beer has been introduced to the world. 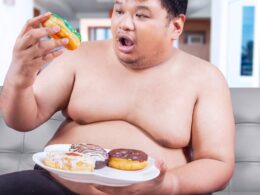 This website uses cookies to improve your experience while you navigate through the website. Out of these cookies, the cookies that are categorized as necessary are stored on your browser as they are essential for the working of basic functionalities of the website. We also use third-party cookies that help us analyze and understand how you use this website. These cookies will be stored in your browser only with your consent. You also have the option to opt-out of these cookies. But opting out of some of these cookies may have an effect on your browsing experience.
Necessary Always Enabled
Necessary cookies are absolutely essential for the website to function properly. This category only includes cookies that ensures basic functionalities and security features of the website. These cookies do not store any personal information.
Non-necessary
Any cookies that may not be particularly necessary for the website to function and is used specifically to collect user personal data via analytics, ads, other embedded contents are termed as non-necessary cookies. It is mandatory to procure user consent prior to running these cookies on your website.
SAVE & ACCEPT
Total
1
Share
0
1
0
0