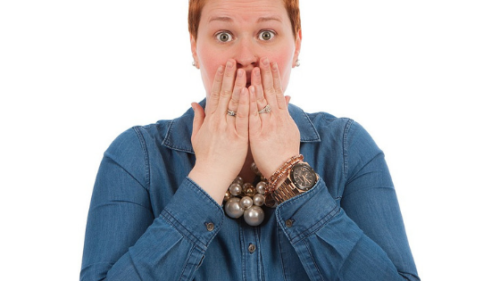 1. When aroused, the vagina doubles in size…This is because of its pleated walls.

During sexual intercourse, Arousal causes two -thirds of your upper vagina to expand in order to support the movement of sperms up to the cervix.

The vagina can swell from ½ inch to 2 inches wide when having sex and it then returns back to its regular size after sex.

However, after childbirth, it might be hard for your vagi to go back in shape without professional help

2. The word “Vagina” comes from Latin meaning “scabbard” for sword or “sheath”.

I would have preferred Pleasure hole, hot pot or maybe penis foyer but I will call it dick holder.

By then, the word sword was a common term for the penis.

Funny and amazing, the uterus and vulva were used interchangeably to mean Wrapper just like a baby wrapper. Amazing!

The word Kleis was used to mean clitoris like a way in, Baby do you feel me?

Hahaha!, the Romans and Greeks were really centuries ahead of their time.

3. The Vagina can clamp down on a Penise.

Vaginas are so strong to hold a penis in between the legs, The muscles of the vagi can clamp down the penis in an intense way during intercourse making it hard for a man to withdraw.

4. Your vagina can fall out.

The vagina can fall from its normal location to the pelvis towards the opening of the vagi, this is known as vaginal prolapse.

In serious cases, it can protrude outside your body and its like giving birth of your uterus.

This usually happens after childbirth or menopause since the pelvic muscles are weakened but it is a rare situation.

But if it happens, You can be treated by surgery.

5. The clitoris is way bigger than you imagine them.

According to researchers, the clitoris isn’t small as you think they are, In fact, its an entire organ of its own.

It is hidden inside the body

Some doctors estimate it to be the same size as a medium zucchini.

Yes, that is true, But there the only function is for female pleasure because the penis has only 4000 nerve endings.

7. Your Pubic Hair is of high importance.

Pubic hair acts as a protective buffer of your vagina and I think you already know that.

But did you know that it also signifies to the sex partner that you are biologically ready for procreation?

It also acts as a carpet for trapping sexy smells, so its high time you think about it before you pay 50$ for that Brazilian wax.

8. Sharks and vaginas have something in common.

Sharks and vaginas share a compound squalene, It is mainly extracted from shark livers and its used for pharmaceutical vaccines.

It can also be used as a natural vaginal lubricant.

I think the world is full of surprises.

10. Not all vaginas have hymens

Not all women are born with hymens, All women have hymens in different shapes ranging from thickness, shapes, and sizes.

It is possible that you may not bleed at your 1st time having sex and this is because you don’t have a hymen.

It’s best you don’t worry about the hymen.

Previous articleTen Foods That Will Make Your Vagina the Happiest
Next articleIs it normal to have a wet vagina all the time ?